Bugatti has been toying with the idea of a second model line for more than a decade, with the company even previewing a potential sedan in 2009 with the Galibier 16C concept.

Under the reign of former chief Stephan Winkelmann, Bugatti’s focus was centered on an SUV-like vehicle as the second model line, one powered by batteries.

However, things have taken a turn since Bugatti’s merger last fall with the hypercar division of electric vehicle technology company Rimac, which formed the new company Bugatti Rimac led by Rimac CEO and founder Mate Rimac.

In an interview with Autocar published on Tuesday, Achim Anscheidt, Bugatti’s design chief, said the brand is now concerned a more practical, higher-volume model could dilute the exclusivity of Bugatti. 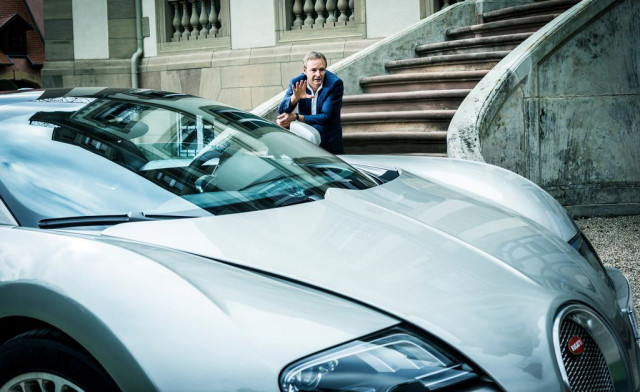 “We always had an idea of what a second model line could be,” he said. “But then we were also [thinking] at one point, are you starting to sell out the brand?”

Anscheidt didn’t completely rule out the idea, however. He said if Bugatti were too launch a model with higher volumes, then it would require the hypercar line to become even more exclusive to ensure some balance between the two.

Winkelmann’s predecessor, Wolfgang Duerheimer, revealed in 2016 that four options were on the table for Bugatti’s second model line: a sedan, SUV, EV, and more attainable supercar. Given the trend toward SUVs, with even Ferrari launching one earlier in September in the form of the Purosangue—a high-riding Bugatti makes a lot of sense.

Bugatti has plenty of time to decide. Mate Rimac, in an interview with Automobilwoche (subscription required) published earlier in September, said there would be no Bugatti SUV or EV within the next 10 years. He has previously said Bugatti is focused on hybrid powertrains for its next chapter, though the current quad-turbo 8.0-liter W-16 engine first introduced with the Veyron won’t stick around. The final model to feature the engine is the Mistral roadster unveiled in August.

Senators ask for draft bill before voting to convene …

Wedding bells booming in Hawaii in 2022

Kailua Dance Academy and the Queen of Nori

Hundreds of essential workers on Maui will be compensated …

Senators ask for draft bill before voting to convene …

Our Kakaako to host stargazing event

LIST: Best dumpling spots to check out in Honolulu